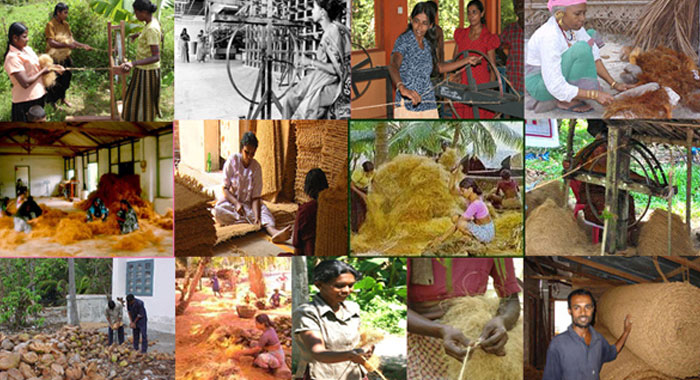 COIR INDUSTRY
Coir Industry is an important agro based export and employment oriented cottage industry widely spread over. The area Coconut husks is the basic raw material for the coir industry. Coir fiber extracted from the coconut husk, is a natural hard fiber which can be used in the manufacture of a verity of products, such as floor coverings, geo-textiles, rope, cordages etc. which in turn can be used for a variety of industrial and agriculture purpose. The industry provides employments to about half million artisans mostly in the rural sector. About 80%of the work force in the coir extraction and the spinning sector are women’s.

The white fiber produced from the retted husk which is spun into coir yarn and products that have acquired special preference among the foreign buyers. Brown fiber is produced from dry or green coconut husk without retting by mechanical means

HISTORY
Coir is the precious gift and pride of Kerala. The most important Traditional Industry, generating employment, is the Coir Industry, which is a standing monument of the toil of nearly 3.75 lakhs of workers with nearly 76% of them being the women folk, all the way from the outer husk to the golden yarn and then to the fabrics of coir and all that. Co.operativisation scheme in the Coir Sector was originally started by the Government of the erstwhile Travancore state in 1950 and ever since then the Government have been extending all helping hands to the Sector for its growth through support and welfare measures for the workers. Unfortunately, neither the growth of the industry nor the living condition of the Coir Workers has been to the desired level. Inspite of the sincere efforts of the Government, the Coir Industry is still a ‘sick traditional industry’ craving for revival for its survival in the field of competition with products of other natural as well as synthetic fibres both in domestic and International Markets. Ofcourse there has been a change for the better in the Coir Industry in the Co-operative Sector due to the various schemes implemented and assistance given by the Government. Still, we have a long way to go to save it from its down-trodden plight to save the industry as well as the workers involved and it is our duty.

Problems of non professionalised management system in the Co-operative Sector, the lack of responsibility or sincerity of the Managing Committees, the hesitation of the Union Leaders to accept mechanization and modern technologies, shortage of availability of husk due to attack of Mandari disease and extensive use of tender coconut, absence of any efficient system of uninterrupted collection or procurement of the available husk, the Societies’ over dependence on Governmental assistance, unhygienic surroundings and conditions of the work area of traditional retting and beating operations etc. have resulted, among other things, in reduction of fibre production in the state and consequently in acute shortage of fiber and unprecedented increase in the price of fibre in the state as it has to be purchased from elsewhere. The non-commissioning of more than 20% of the 56 Defibering units already sanctioned by the State Govt. in the Co-operative Sector under the ICDP Programme for mechanized fibre production, and the unsatisfactory working of even most of those units already commissioned due to various reasons, coupled with non-availability or non-collection of available husk have made the position from bad to worse.

Out of the 802 registered Co-operative Societies only 455 are now working and only 21 out of them are working with profit. A good number of societies are now on the verge of liquidation. Even the Appex society – Coirfed – has been facing severe financial crisis for the last few years. So also the Public Sector Undertaking in Coir Sector like the Kerala State Coir Corporation. Only Foam Mattings (India) Ltd. (FOMIL) is running in profit. Inability to produce new designs and more value added items as per the changing taste of consumers is one reason for the poor performance. Lack of R & D activities and lack of innovative marketing are the other main reasons.

Out of the 837 registered Co-operative Societies only 522 are now working and only 41 out of them are working with profit. A good number of societies are now on the verge of liquidation. Even the Appex society – Coirfed – has been facing severe financial crisis for the last few years. So also the Public Sector Undertakings in Coir Sector like the Kerala State Coir Corporation and the Foam Mattings (India) Ltd. (FOAMIL) which are running at loss, for years. Reluctance or inability to produce new designs and more value added items as per the taste of consumers is one reason. Absence of R & D activities is also responsible.

In order to tide over the present acute shortage of fibre for the coir industry, the department has arranged import of fibre from foreign countries as a trial and temporary measure subject to study of the economic viability of the arrangement as a continuing process as and when necessary. Revival of the existing Defiberring Units in the Co-operative Sector and opening of more such units in the Private Sector are therefore to be done, to ensure continuous availability of fibre.

Action has already been initiated for setting up a National Coir Research and Management Institute in order to strengthen the R&D activities in the Coir Sector with a view to enable the industry to produce more value added and new design products at a reasonable but competitive price to sustain an upper hand in the domestic and in the International Market of Coir Products.

Taking the above crucial situation mentioned in a nut-shell, it is quite imperative to continue the various Plan Schemes now being implemented and, in addition, to introduce a number of new schemes in the coir sector