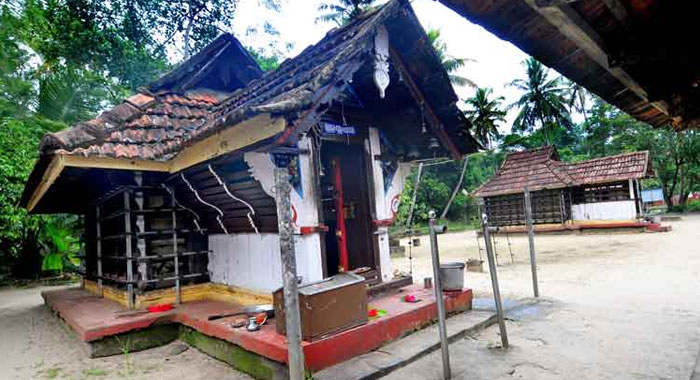 Cheerappan Chira family and their Kalari, are as old as the mythology of Lord Ayyappa and his abode at Sabarimala. This temple is situated in the Muhamma at Cherthala thaluk of Allepey District of Kerala. It is believed that Lord Ayyappa studied martial arts in this ancient Kalary; remnants of which still exists.
This temple is built in the same pattern of Sabarimala Temple. The temple also has lord Siva, and Parvathy, Goddess Annapoorneswary, Goddess Malikappuram, Ganapathy, Sarpam as other deities.

The importance of the relation of these two ancient temples is evidenced by the “Thirupattaya Charthu” (the royal decree) of the Pandalam King, by which the right to conduct the fireworks offerings at Sabarimala was given to cheerappan Chira family.
In the year 2001, as instructed by the Ashtamangala Deva Prasnam, (the astrological findings) held at Sabarimala, Sabarimala temple authorities conducted special poojas and offerings as penance at this temple.

Till this date, people of old age and women who cant undertake pilgrimage to Sabarimala come to this temple to offer their prayers on the belief that, by the darshan at Mukkal vettom, Lord Ayyappa will shower the same blessings as the darsan at Sabarimala. 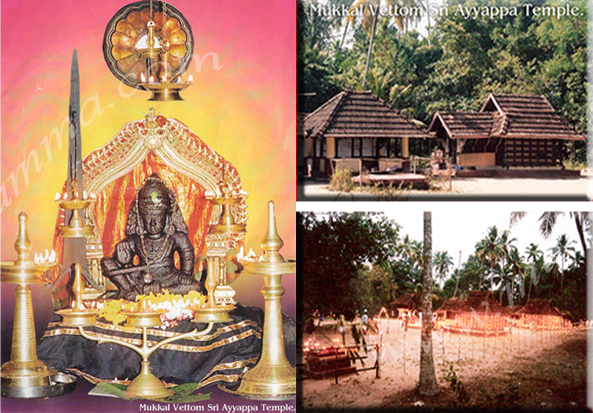 Cheerappanchira, the famous Kalari (martial art) exponents of Lord Ayyappas times, taught this only to the people of karappuram area ( place around Muhamma ). Ayyappa- the then crown prince of Pandalam Kingdom- approached the Mooppan (senior most member of the family) who is the Guru, to learn Kalarippayattu. Having mastered this technique, Lord Ayyappa, rushed to Pandalom on hearing the sudden attack on kingdom, virtually disaapearing from Cheerappan chira. Before his departure he left behind his royal belongings to reveal his identity to his guru. [His quarters at cheerappan chira is maintained till date as Swami Mattom.]

On realizing the divine identity of Lord Ayyappa, his earthly Guru started his annual pilgrimage to Sabarimal temple. On becoming old, when he was not able to make his annual pilgrimage to Sabarimala temple, Lord Ayyappa apeeared in the dream of the saddened Guru and consoled him for his inability to take the annual pilgrimage. Lord Ayyappa also instructed the Guru to construct a temple at cheerappan chira, where he will reside with his full powers for ÃƒÆ’Ã¢â‚Å¡Ãƒâ€šÃ‚Â¾ th ( 3 quarters of the year- which in Malayalam is Mukkal . Hence the nameMukkal Vettam) of the year. He also informed that a log of sandalwood would appear against the flow of the waters at Vembanadu Lake the next day, which should be used for constructing the temple. Folklore has it that the log of sandalwood appeared in the waters the next day and with which the Mukkal Vettam temple was built.

During the makara samkrama day (makara villakku day) the temple is closed, as it is believed that Lord Ayyappa with his full powers resides at sabarimala 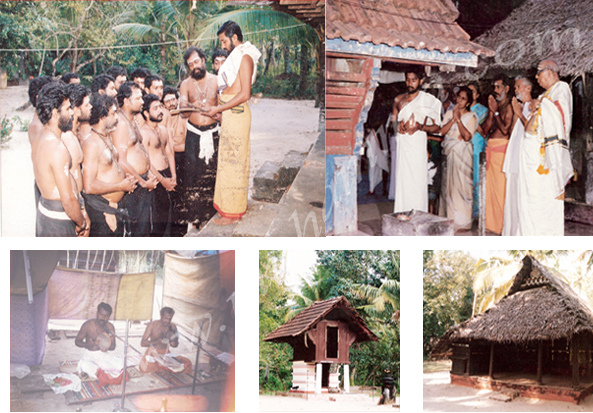 During the month of Karkidakam, medicinal porridge is distributed by the temple authorities, which is a speciality of this temple. This porridge- the sacred medicine- believed to have been prepared for the martial arts exponents, is prepared strictly based on the secret recipe, which has been handed over by generations of this ancient family.

The family patriarch Sree C.K.Soma Sekhara Panicker’s son, Sri Kesav Lal is the chief priest of the temple. Having mastered the Vedic Rituals from the famous Dayananda Vaidika Gurukulam, Vaikkom, and Tantric Rituals from Sree Vadakkan Paravur Sreedharan Tantri, he devotes major portion of his time in providing relief to people with doshas by performing Guruthy, (an extreme form of offering to Goddess Kali), Uchadanom- the remmooval of negetive entities like Yakhi, gandharvan etc and other various powerfull Tantric Rituals like Sudarshana Homam, Sulini homam, Akhora Homam etc.

An exponent of Pranic healing and energy scanning, and a true Sreevidya upasaka, he is an expert in Pendulam astrology and Spiritual healing.